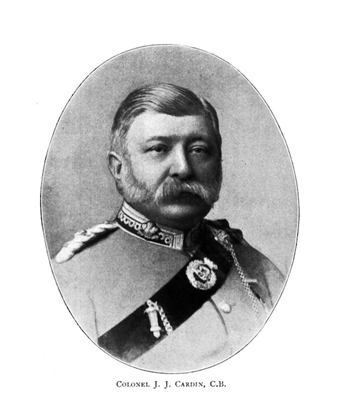 James Joseph Cardin was the epitome of the Victorian civil servant. He worked for the Post Office for forty years, and from 1886 until his retirement in 1901 he held the important position of Comptroller and Accountant-General. In 1897, in Queen Victoria’s Diamond Jubilee honours,  he was made a Companion of the Order of the Bath (CB), in recognition of his many years at the Post Office. This honour was then, and still is, often awarded to senior members of the civil service, often in the later years of their careers. He was also the Lieutenant Colonel of the Civil Service Volunteer Rifles, receiving the Volunteer Officer’s Decoration for his 34 years of service to the regiment. He was, in all respects, the epitome of the long-serving Victorian civil servant and very much part of the London professional elite.

One of James Cardin’s main roles was to oversee the merger in 1884 of the Post Office scheme of life insurances and annuities, with the Post Office Savings Bank, which has been set up in 1861 as a way of providing working-class people with a safe place in which to keep their savings. In the Post Office, as well as in the Civil Service and professions more widely, the payment of a pension ceased when the pensioner passed away, often leaving the family in financial difficulties.  For the growing professional middle class, in which James was firmly embedded, these types of insurance and annuity schemes were important because they provided some financial security for family members when the principal wage earner died. However, the competition for life insurance and annuities from companies such as the Prudential, was strong and the Post Office Savings Bank, through which the scheme was to operate, was firmly associated with working-class customers. For those reasons, perhaps, middle-class investors in the Post Office scheme were relatively few, and the merger that Cardin oversaw was largely unsuccessful.

After his retirement in 1901, because of respiratory problems following a bout of influenza, James Cardin spent a quiet life in the leafy London suburb of Streatham, taking holidays on passenger liners – travelling first class. He died on 3rd May 1917 aged 77,  from chronic bronchitis and pneumonia, leaving an estate worth over £4600. He was survived by his three children: Herbert, Ernest and Mary Elizabeth.