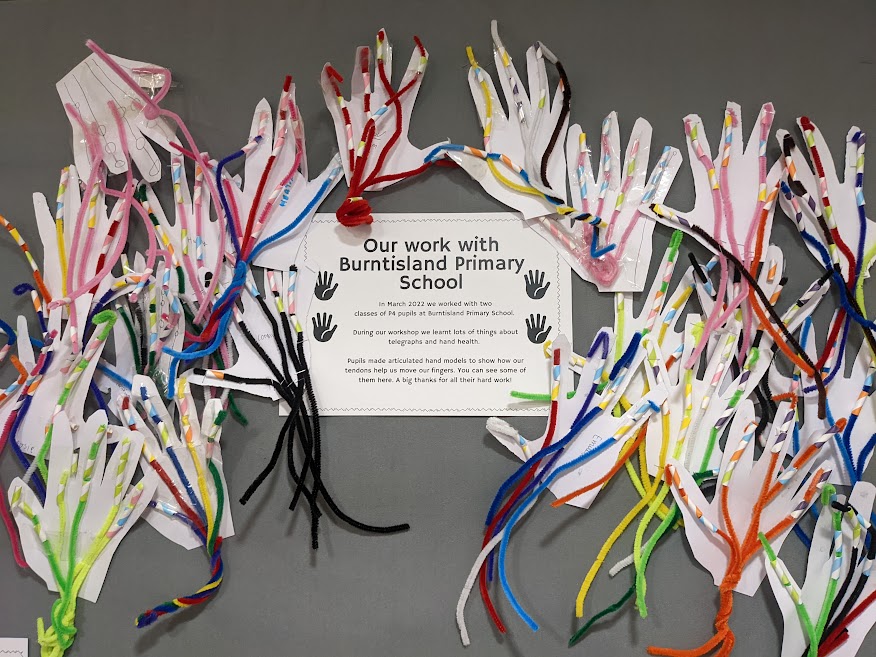 On 9th of April our project launched an exhibition at the Museum of Communication Burntisland entitled Hand Health in the Post Office. The exhibition traces the long history of occupational hand disorders in the workplace, from telegraphists’ cramp in the nineteenth and early twentieth century Post Office through to the “occupational epidemic” of Repetitive Strain Injury (RSI) in the 1990s.

The first recorded British description of the symptoms that became known as telegraphists’ cramp came in August 1882 from Dr Edmund Robinson, the Medical Officer employed at the Leeds Post Office. After discovering two telegraphists afflicted with hand spasms, Robinson began to monitor the telegraphists for similar symptoms. He detected four cases in total and noted its similarities with another, well recognised occupational hand condition, ‘scriveners’ palsy’.

The exhibition brings together different episodes in the history of the Post Office and the history of communications more broadly to tell a new story about the ways our hands continue to be vital working tools. While the introduction of new technologies such as the single letter sorting machine may have reduced the need for manual sorting, for example, it presented new kinds of musculoskeletal risks to workers spending long hours at coding keyboards. The ergonomics of Post Office work became a subject of extensive study in the post-war period in particular, where Post Office management collaborated extensively with physiologists and psychologists to help employees adapt to new workplace technologies.

There was lots we didn’t manage to fit into the exhibition, or had to condense. One was the work of Thomas Wemyss Fulton, who was a medical student by day and a telegraphist by night. Like many of his fellow students at the University of Edinburgh, Fulton had to take on a part-time job to cover the costs of his medical studies. It was during these night shifts at the Post Office that he first encountered telegraphists’ cramp. Fulton was inspired to undertake observational research and came across four telegraphists who were afflicted. He published his findings in the Edinburgh Clinical and Pathological Journal in 1884, and completed further study in 1887, when he took his MD and focused his thesis on telegraphists’ cramp. His research led to the identification of the morse key as the primary cause of hand cramp and injury in telegraph work.

Another neglected figure in the history of occupational health is Dr William Floyd, a scientist based at Middlesex Hospital who acted as consultant physiologist to the Post Office in the post-war period (breaking new ground as one of the first consultant ergonomists in the country). Floyd conducted detailed studies into the ergonomics of postal work, researching topics such as lighting, chair design, eye strain, and the physiology of the hand. The last topic in particular helped to complement work carried out by Dr Reuben Conrad – a psychologist then based at the University of Cambridge – who also acted in a consulting role for the Post Office. In this capacity, Conrad studied in detail how our brain processes numbers and letters, as well as how different keyboard layouts can impact memorisation and typing speed. Put together, both Conrad and Floyd’s insights into the ergonomics of typing would prove vital to the eventual introduction of the postcode system.

The Museum of Communication Burntisland holds several objects – including telegraph keys, computer keyboards, and computer mice – that we have on display in our exhibition to highlight important moments in the history of workplace ergonomics. Our exhibition also features work by pupils of Burntisland Primary School. In March we collaborated with teachers to run workshops that introduced primary 4 pupils to topics such as Morse Code, hand anatomy, and occupational hand conditions. Pupils worked together to discuss the different ways we communicate today, the various things we use our hands to do, and make articulated hand models to show the function of our joints and tendons. Many of these models can be seen in the exhibition space. There are a number of interactive activities on the gallery space for children, too, including a Morse Code trail, a Morse Code Lego interactive, and an opportunity to decorate their own hand cut outs and add them to the gallery wall. We’re hoping that our exhibition inspires both the children we worked with as well as those who will visit the Museum to learn more about the history of the Post Office, and reflect on the ways in which technological design has evolved since the nineteenth century to accommodate the limits of the human body.

If you have any insight into the history of ergonomics in the Post Office please feel free to get in touch with us at addressinghealth@gmail.com We’d love to hear from you!