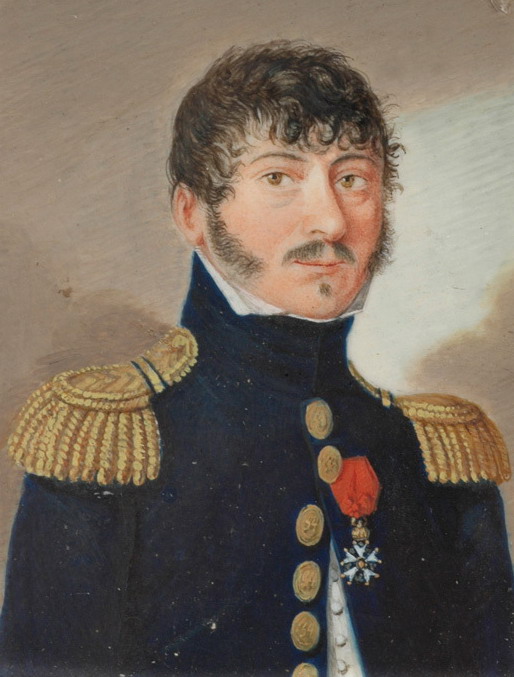 On Saturday last John Hughes, innkeeper and postmaster of Rye, and William Robinson, who (with a man named William Platter) were convicted… of having aided in the escape of General Phillippon [sic] and Lieutenant Garnier, were placed in and upon the pillory pursuant to their sentence, on the sea shore in that town, where they remained from twelve to one o’clock. Hughes, on ascending the platform, exclaimed, “Now, Robinson, we shall have a peep at Boney’s tower” (Morning Chronicle, 5 September 1812)

You may reasonably ask what this extract has to do with the Post Office. An episode from the Napoleonic Wars, the ‘Boney’ that Hughes refers to is Napoleon Bonaparte. Armand Philippon and Philippe Auguste Garnier were officers in the French army. Following his surrender to Wellington at the Siege of Badajoz in 1812, Philippon was placed on parole in Oswestry in Shropshire. Three months later, he and Garnier disappeared, and re-emerged in France.

Some histories simply refer to the two French officials being smuggled out of England. Yet crossing the Channel may have been a breeze, so to speak, compared with making the two disappear from Shropshire and reappear, undetected, in Rye in Sussex. Describing it as smuggling sounds more dramatic than saying he escaped through the mail system. Yet the latter was an equally key component of his escape.

Hughes’ job as a postmaster put him in a position to orchestrate an elaborate escape. From the sixteenth century onwards, Europe saw a revolution in communication, with a rise of letters, books, and newspapers. In addition to the development of printing and an increase in literacy, this trend was supported by improvements in the transport network. Turnpike roads in the eighteenth century greatly improved long distance travel, and a large network of carriers and stagecoaches developed to speed traffic between places. Relay stations emerged along routes where there could be a change of horse and rider. These ‘posts’ gave their name to the modern-day Post Office.

The expertise of postal workers in navigating Britain’s road network is evident in the case of the escaped French army officers. While a postmaster was complicit in the conspiracy, post-boys were instrumental in tracing the fugitives to John Hughes’ inn.

[The officials investigating] traced them… from Farnborough, by the information of the post-boys who drove them, they as followed the carriage to Rye. At Newinton, the stage on this side Rye, they found a post-boy, named Crittenden, who drove them to Rye, and who stated that they arrived there on Thursday night. (Morning Chronicle, 9 July 1812)

Hughes’ joint occupations of innkeeper and postmaster may seem curious to a twenty-first century reader. In the early modern era, though, it was actually a very common combination. Many of the 500 postmasters in Britain by 1800 were innkeepers. Early modern inns served a wide range of functions, offering large rooms, accommodation, sustenance (both for people and horses), and a convenient distribution along Britain’s road network. These attributes made them ideal posts for the delivery of letters and newspapers.

Throughout the eighteenth century, innkeepers were often involved in the stagecoach business, renting patrons a vehicle known as a chaise. By the middle of the century, there were 2,308 chaises for hire, with two-thirds of these being on London’s increasingly busy roads. Some of these vehicles, known as post chaises, were designed specifically for the postal system.

These developments played a crucial role in Hughes’ scheme. James Miller was a Shropshire miller with whom Hughes made arrangements by letter, presumably delivered by couriers he knew to be trustworthy. Robinson hid the fugitives among sacks of flour in his horse-drawn gig and rode to Birmingham. Here, Hughes had a post chaise awaiting, whose driver posed as a servant to take the two officers and Robinson to Rye. They hid in one of the rooms in Hughes’ inn until nightfall, when Robinson took them out by boat with two smugglers called Hatter and Turner who transported them to France. When officers found Robinson back at the inn, ‘his boots were wet with sea water. He said, upon being questioned, it was so, and that he had been out all night at sea mackarel [sic] fishing’ (Morning Chronicle, 6 Aug 1812). John Hughes’ command of the transport network was clearly one step ahead of the government officials. A post-boy had seen him with the fugitives but by the time the investigators arrived there was no longer any sign of the fugitives at the inn.

The postal system had been vital in allowing the communication, transport, and secrecy for this venture. It is perhaps also unsurprising to find a postmaster innkeeper complicit in a conspiracy. In fact, both the postal system and inns had long been associated with surveillance. Historians have variously depicted early modern inns as sites of subversive plotting or as centres of state surveillance, with innkeepers overhearing valuable gossip. Likewise, the early British Post Office saw government surveillance of letters to check for subversive activity. In the 1650s, the ‘secret room’ was created, in which post was opened and monitored before being delivered. This practice continued into the eighteenth century and was not formally abolished until 1844.

The spread of the railway network from the 1840s reduced the importance of roads for the purposes of long distance travel and with it the importance of innkeepers, such as John Hughes, in the Post Office’s operations. By the time of the 1851 census, only two people were described as both innkeeper and postmaster. The latter was still often combined with a second occupation, but most often the running of a small retail or manufacturing business. In place of the network of inns, there arose a more professional institution with a bureaucratic and centralised system of monitoring and surveillance of both the post and of those whose responsibility it was to deliver the mail. The era of innkeeper postmasters with a command of the British transport network that could make a wanted person seemingly vanish had come to an end.

The United Kingdom census of 1851