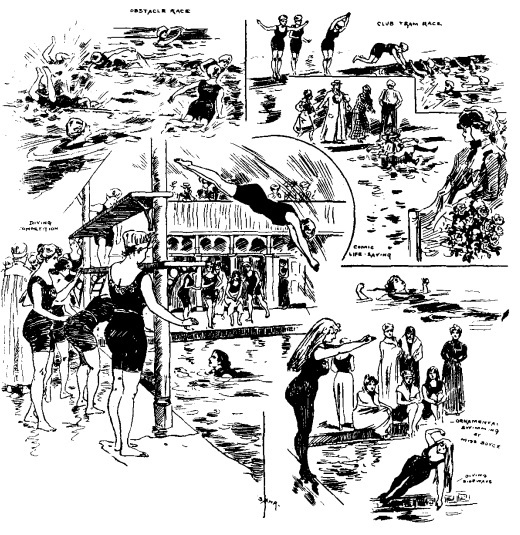 Amongst the pages of St Martin’s-le-Grand – a magazine for Post Office employees which ran from 1890 to 1933 – it is difficult to miss the significance of sport to postal workers. Accounts of sporting fixtures abound, showing the variety of sports which found a place in the Post Office during this period, from cycling to golf, swimming to gymnastics. When taken together, these accounts help bring histories of the Post Office and histories of Victorian sport closer together.

These accounts also bring to life the sheer scale of sporting events in the Post Office. In 1906, the Liverpool Post Office Sixth Annual Amateur Athletic Sports event was held and attracted 438 competitors and 2000 spectators. The horse and bicycle races were noted as being especially popular, attracting between them almost 300 entrants. The victor of the running high jump also received a special mention: C. Povey ‘jumped 4 feet 5 inches and carried off a handsome gold medal’. They were joined by musical performances and by an exhibition of gymnastics by telegraph messengers, who were ‘specially trained for the event’. That ‘the day turned out wet’ seems to have done little to dampen the spirits of the competitors and the spectators. That such events were held and were such big social occasions is evident, one where workers could gain kudos from both their colleagues and the public for their athletic prowess.

The extent to which sport was considered healthy for workers is, however, less obvious. In a 1902 article in St-Martin’s-Le-Grand, a contributor related how a postmaster with insomnia had come to him ‘in search of health’. A daily round on the golf course was prescribed and, according to the writer, the postmaster ‘returned to his labours fresher than he had been for years’. He also had a new ambition to join his local golf course. The positive impact of golf on the postmaster’s body was even a visible one, which provided further evidence in favor of the contributor’s prescription of it: ‘his personal appearance bore out his own statement – that he felt a new man’. The contributor went on to suggest that departmental golf courses could prove a remedy to many common medical complaints of employees, which would also mean some ‘considerable saving’. Sports such as golf, in this way, could serve both employee and employer: it was even noted by the Medical-Officer-in-Chief of the Post Office that there was ‘much less annual sick leave amongst members of the staff who are golfers than amongst the non-golfing staff’. In this instance, the writer was so confident in the benefits of golf to postal workers that he made the following remark: ‘I make my suggestions free, gratis, and for nothing, reserving, of course, to myself the right to claim…any bonus or reward the Postmaster-General may desire to give to the author of the suggestion’.

The sporting habits of Post Office retirees were also frequently noted in the pages of St Martin’s. Sport was a key marker of an ex-employee’s character and their capacity for work. In 1908, a Mr. Alexander Kettles retired after fifty-one years active service, during which he was transferred to the Post Office in 1870. His career is described as having been ‘a long, exceptionally interesting and varied one’. His promotion in the Post Office was rapid, culminating in his being appointed Chief Superintendent to Telegraphists. Mr Kettles’ commitment to and aptitude for work is further evidenced by his, apparently, not being absent ‘a single day’ during his career. It was speculated that his good health was ‘due more than anything else to his great love of outdoor exercise’. Mr. Kettles played football and was in the Telegraphists’ Cricket Club, but he was most committed to cycling. He took part in many a long tour (seeing sixty or seventy miles as a normal afternoon’s ride) and helped to run the Scottish Cyclists’ Union from its establishment. The reader is left in no doubt that, even in retirement, his devotion to sport would not wane, for it was related that he turned to bowling.

Sports in the Post Office crossed over gendered divides as well. In 1902, St Martin’s included a photograph and related commentary of ‘The Isis Ladies’ Swimming Club’ to commemorate their 5th Annual Entertainment in 1901. Prizes were awarded to the victorious competitors and crowds of spectators were invited to watch. However, there were markedly different attitudes concerning the benefit which sport had to women’s health in comparison to their male colleagues. Swimming for women was often described as for ‘relaxation after office hours’, rather than a tool for improving an employee’s strength, physique, or for extending their occupational longevity. That women participated in sport was known, but for many it was understood as a fundamentally different activity to men’s sport, although still worthy of spectators, recognition, and visual documentation.

Not all sport was universally embraced. The ever-active Mr. Kettles, for example, despite his extensive sporting repertoire, was strictly averse to golf, even in retirement. However, these brief anecdotes hint at the complex place of sport in the lives of postal workers at the beginning of the twentieth-century. Sport was a space beyond the workplace to forge occupational ties and to establish and enhance workplace reputations. Crucially, health was a way for the writers of St Martin’s to understand the benefits that sports — whether swimming, running, walking, cycling, playing cricket or, in some cases, golf – could bring to postal employees. Evidently, the impact of sport on a postal employee’s ability to work was the priority and I am eager to establish if such a theme was characteristic of the medical history of the Post Office more generally.