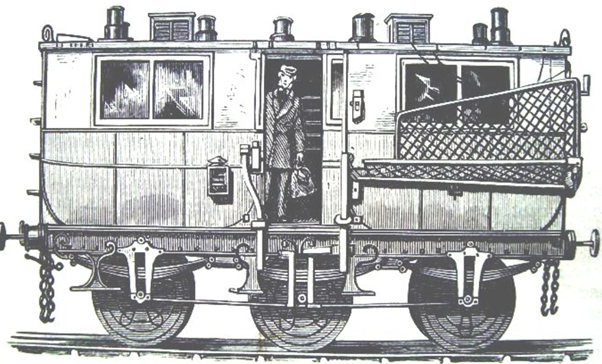 A Mid-Victorian Travelling Post Office van. (A travelling clerk, complete with carpetbag, is standing at the door).

Dr Augustus Waller Lewis, Chief Medical Officer to the Post Office, made an unexpected journey to the Warwickshire town of Atherstone on Friday 16th November 1860.   The London & North Western Railway facilitated his visit by a special stop in the schedule of the 5pm express from Euston to Liverpool. When he arrived at Atherstone clearing up work was still in progress near the station following a disastrous collision between the Up Limited Mail and a cattle train which had occurred in the early hours of Friday morning. Nine Irish cattle drovers and the fireman of the Up Limited had lost their lives. The toll of injured Post Office sorting clerks and mail guards was high, at least twelve. Several were still being treated locally. It was the care and welfare of these staff which had brought Dr Lewis from his office in London, sent to Atherstone under the instructions of John Tilley, Assistant Secretary of the Post Office.

The Up Limited was one of the most important mail trains on the system – a precursor to the celebrated Up Special Travelling Post Office (TPO). It ran overnight from Carlisle to London Euston and included through carriages from Scotland. The limited mails had been introduced in February 1859 as part of a major change to the travelling post offices on the west coast main line.  Rowland Hill’s Post Office administration had asked the London & North Western Railway to make the trains faster, maximise the space for mail and reduce to a minimum the time spent stopping at stations. The timetable for these new services often demanded prolonged running at over 40mph. In the 1860s this was high speed.

The Up Limited of 1860 reached London Euston from Carlisle in less than eight hours. It was made up of six postal vehicles and only two passenger carriages. In addition to six brief station stops between Carlisle and London, the mail bag apparatus was used at 22 locations. The sorting vans varied in length from 22ft 6in to 27 ft and were connected via corridor gangways, an innovation which first appeared on mail trains before coming into use on passenger services. The number of Post Office staff on board reached a maximum of fourteen on the latter stages of the journey.

In a period when signalling systems, brake-power and other safety features were still relatively undeveloped on the railways, the increased speed of the limited mails inevitably resulted in accidents. A letter from a travelling clerk appeared in The Civil Service Gazette shortly after the Atherstone disaster. The Gazette had become a doughty defender of the interests of the travelling clerks of the railway Post Office. The letter, written under the pseudonym of ‘Noctule’, claimed that four railway accidents had occurred to the limited mails on the London and North Western route during a period of little more than a year, resulting in injury to a total of over thirty Post Office staff. In the following issue of the Gazette, the editorial remarked that the railway Post Office clerks were ‘melancholy martyrs to progress’

An historical account of the TPO staff written by J.G Hendy (Curator of the Post Office Record Room) noted that they encountered no less than 28 serious railway accidents across the network in the period 1860-1867, resulting in serious injuries to a total of more than 110 staff. The Up Limited featured in a number of these.

Dr Lewis spent the rest of the evening of 16th November 1860 at Atherstone visiting the injured Post Office staff still there and ensuring that were in good hands.  Some of them may have remembered him from the journeys he had made on board the travelling post offices in 1859 when he was investigating aspects of the health and safety of the staff. The implementation of his subsequent recommendations was still a work in progress, but Dr Lewis no doubt took the opportunity of gleaning fresh eyewitness accounts from the sorting clerks about the effects of a high-speed collision in a busy sorting van.

Some of the injuries suffered by the staff on 16th November were serious. The Up Limited had ploughed into the rear of the cattle train at high speed and the staff, mostly standing as they sorted the mail, were thrown violently around the vans and into each other.  Railway staff at Atherstone had been attempting to reverse the cattle train back into a siding to allow the mail train to pass. The drovers, who were travelling in a van behind their cattle, had little chance of survival.  The subsequent Board of Trade enquiry by Colonel Yolland placed the blame for the disaster on the driver of the Up Limited Mail for failing to keep a proper look–out, but also pointed to inadequate brake power and poor communication.

The injured Post Office staff all recovered but several incurred lengthy periods of sick absence and a number successfully claimed compensation from the London & North Western Railway. Some of the details are noted in the pension records.

As a postscript to the Atherstone accident, at least two of the sorting clerks injured on the Up Limited went on to have careers in the senior ranks of the Post Office.  John Duesbury became one of the TPO Superintendents and then spent 15 years as Postmaster of Hull. James Bowker moved to Ireland and ended his career in 1899 as a Principal Clerk, one of the top jobs in the Dublin General Post Office administration. Outside his Post Office career he was a published author.

Selected pension records in TPM of staff injured at Atherstone.