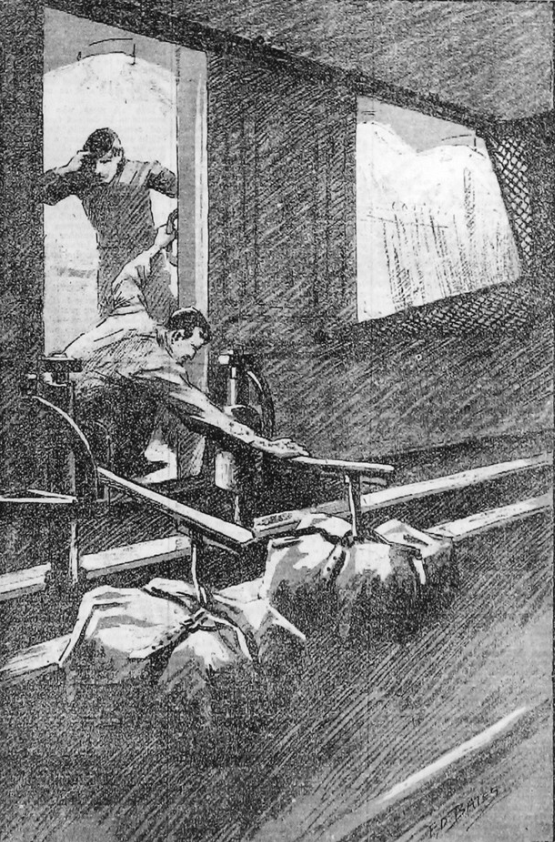 ‘With Her Majesty’s Mails From Crewe to London’, report with illustrations concerning the work of the Travelling Post Office. (New Weekly, vol VI, 5, 4 May 1895)

Soon after 8pm on Tuesday 8th December 1896 a column of uniformed men could be seen making its slow and measured way through the streets of Windsor. Processions were a familiar sight in the royal borough, but there was something unusual about this one. It was made up of around 40 Windsor Postmen and Telegraph Messengers in their distinctive uniforms of blue with red piping. Accompanying them was the Postmaster, Mr. Benjamin Thomas, and most of his clerical staff. A bearer party of Postmen was carrying the coffin of a recently deceased comrade, Albert Latchford.

Remarkably, Albert was not a member of the local staff and was unknown to the Windsor men. He was a 24-year-old Sorter from the ‘Circulation Office’, the main letter sorting office at the GPO in London. He had died after falling from the London & Bristol Sorting Tender at around 6am the previous Saturday morning. He was operating the mail bag apparatus as the train sped through Slough at around 50 mph.  After a search, Albert had been found on the trackside, taken by special train to Windsor and then admitted to the Infirmary. He had sustained a fractured skull and a broken leg. He succumbed to these injuries only a few hours later.

The response of Mr. Thomas and his staff at Windsor exemplified the strong esprit de corps in the Victorian Post Office. Never mind that Albert was unknown to them and worked in a different and distant department, what mattered was that he was a ’brother officer’.  Before the cortege set off from the Infirmary, Thomas made a short address, a hymn was sung and a prayer offered. After a change of bearers at the Post Office the cortege continued its journey, past the Castle and then to the GWR station. Two Windsor postmen accompanied the coffin to Paddington station in London, where it was handed over to Albert’s family.

Albert had started his Post Office career in 1886 as a Telegraph Messenger in London. He progressed to the Postman grade in 1890 and was promoted Sorter in 1893. London Sorters provided most of the staff of the travelling post offices. The London & Bristol Sorting Tender was a ‘Day Mail’. It left Paddington station at 5.30 am and handled mail which came through the system too late for the main overnight mail trains. For the small team of Sorters on board it meant an early start and then a long day. After a break in Bristol, they worked back to London on the Sorting Tender, arriving at Paddington at 6pm.

Albert’s duties on the 5th December included the operation of the mail bag apparatus. Mail bags due for despatch from the train into the lineside nets had to be strapped into strong leather pouches and then attached to a hinged and spring-loaded iron traductor arm. A Sorter then swung the arm outwards through an open sliding door in the side of the travelling post office shortly before the train reached the lineside net. Loaded pouches were supposed to weigh no more than 60lb but were sometimes heavier. The task required a combination of precise timing and physical strength.

Together with another colleague Albert was responsible for despatching a total of 6 pouches to Slough; 3 into the net located some 1000 yards east of Slough station and 3 more at Farnham Road, just over a mile west of Slough. This operation required each man to reload a traductor arm within about 2 minutes. The first despatch had gone smoothly despite the wet and windy weather but, as Albert turned to grab his final pouch in readiness for Farnham Road, he lost his balance, slipped on the wet floor and fell out through the open door of the carriage.

There was no horizontal safety bar across the open doorway to arrest his fall. Such devices had existed on the travelling post offices before 1860, but had been removed because they ‘hindered’ the increasingly busy operators of the apparatus.  A case of health and safety coming a poor second to operational efficiency. Despite the obvious hazards, surprisingly few accidents were incurred by staff operating the apparatus on board travelling post offices, although there had been a fatality in Scotland earlier in 1896. A greater number of accidents were caused when railwaymen and passengers on trains were struck by mail bags hanging from the lineside apparatus.

The inquest held at Windsor on 7th December 1896 returned a verdict of accidental death. A fellow Sorter who worked alongside Albert on the morning of the accident confirmed that he had been trained on the apparatus but recalled that Albert had asked him for advice on the despatch arrangements as the train approached Slough.  A solicitor representing the Latchford family asked a number of probing questions about the lack of protection for staff operating the apparatus, including the absence of a safety bar. The coroner described some aspects of the operation of the apparatus as ‘a very hazardous undertaking’. He went on to implicitly urge the Post Office to make safety improvements.

The Post, journal of the Fawcett Association, which represented London Sorters, was very critical of the official Post Office response to the accident. It questioned the Department’s attitude to the safety of its staff. It also castigated the absence of a senior official at the inquest and the failure to provide the coroner with a model of the sorting carriage and apparatus.

The Post Office paid £7 4s 6d for Albert’s funeral expenses and in due course awarded his widowed mother a compassionate allowance of £40. He was an unmarried man who had lived with his family in north London before his death.

He was laid to rest in Potton, Bedfordshire, the home town of his mother. A contingent of his fellow Sorters attended the burial.

One of Albert’s colleagues, Frank Davey, felt moved to compose a poem in his memory and it was published in The Post. The opening verse ran: –

Speed on!, grim cruel monster, with thy freight

Of lives and letters. Speed upon thy way!

For there is many a sad and aching heart

Albert Latchford’s lasting legacy was that the Post Office, stung by the criticism voiced at the inquest, reinstated the safety bars on travelling post offices in 1897.